Impacts of a Warming Planet

The impacts of global warming are widespread, already noticeable, and variable by geography. A review of scientific data shows that global ocean temperatures, where most solar heat is trapped, have risen 1.5 degrees over the last century, with the greatest increase occurring over the last 4 decades. This may not seem like a big difference, but it has profound impacts, including a rise of sea levels, more severe coastal storms, changing precipitation patterns, both heavier rains, and extended droughts, and more extreme temperatures, including prolonged heat waves.
The potential challenges posed by changing climate have been known for decades, but it wasn’t until the turn of the century that natural and social scientist and policymakers began to seriously consider, in research, publications, and governance the enormous impacts and implications on modern society.The Intergovernmental panel on climate change’s fifth assessment report, authored through a collaboration of 831 scientists from leading research institutions around the world examine global and regional climate changes and their impact on human activities and economic sectors. Their data, and those analyzed by National Ocean and Atmospheric note common observations.

In the state of Florida, the greatest impact that man has had on climate is through the land surface. Temperatures have risen along with the southeast Florida coast by over a degree F in the last 40 years, especially in the summer months. Much of this can be attributed to urban development, where cities built of concrete and asphalt now absorb and hold more heat than the natural environment they replaced

Global sea level has risen 19 cm (7.5 inches) between 1901 and 2012, and that the rate has accelerated to a rate of 3.2 cm/decade in the last 20 years, matching tide gauge and satellite observations. Sea Level rise can be attributed to glacial melt, as well as thermal expansion, (warm water expands in volume.) Local sea level rise can be either higher or lower than the global average due to differences in prevailing winds and ocean currents and underlying geologic processes like crustal rebound.
Read More

In the future, it is likely that we may experience strong, if not more frequent tropical storms and hurricanes. The IPCC report states that it is more likely than not that there will be a human-caused increase in intense hurricanes by 2100 in some regions. Common sense would dictate that warmer ocean temperatures would lead to more strong storms, as a 1.8 degree F increase in water temperature increase water vapor by 7 %. But predicting more intense and more frequent storms is not that straight forward. In addition to the heat and moisture from the oceans’ surface, hurricane formation is predicated on favorable atmospheric conditions with little wind shear. Climate models are unclear how atmosphere factors may affect hurricanes in the Atlantic region in the future, so it is not certain that all hurricanes will be strong, only that some may be very strong.
Read More

The underlying theory is that as the atmosphere warms, it can hold more moisture and that will lead to more extreme rainfall events. Conversely, warmer temperatures will cause greater evapotranspiration rates leading to more periods of drought. In short, we could be looking at both more drought and extreme rainfall events in a warming climate. Here in Florida, the climate is subject to both drought and heavy precipitation. Because of the nature of our summer convective rainy season and the influence of El Niño/La Niña cycle, the year-to-year variability of rainfall overwhelms other trends or patterns. Florida will continue to be vulnerable to drought, especially when dryness in winter and spring extends into the summer season. Florida is also subject to heavy precipitation events, whether from tropical systems, mid-latitude lows and fronts that tap the Gulf Moisture, or slow-moving summer thunderstorms. It is uncertain if one trend will prevail, but it is likely that we will experience greater extremes of both.

When hurricanes do form, however, the combination of higher sea levels and greater intensity will likely result in higher storm surges along our beaches. Storm surge heights depend on many factors, including wind direction, the beach and near-shore contour, tides and storm intensity. With sea level rise, storms that come ashore during high tide episodes are likely to bring higher storm surges than in decades past. 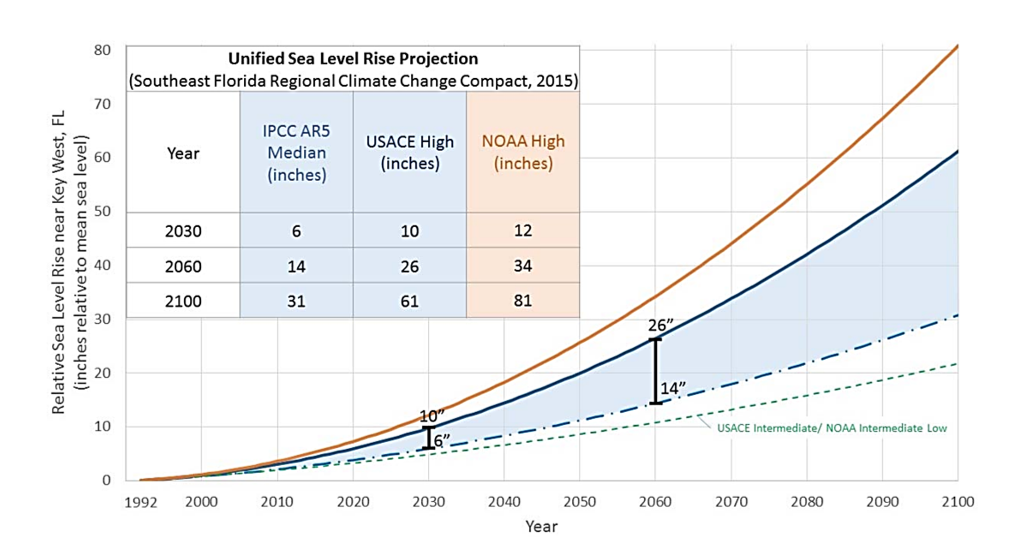 In South Florida, The Southeast Florida Regional Climate Change Compact enlisted elected officials, government staff, scientists from the major research universities in the region, as well as National Oceanographic Atmospheric Administration (NOAA) and USACE to develop common planning tools and projections of local sea level rise. The Southeast Florida Regional Climate Compact scientific teams has documented an increase of approximately 3 inches since 1992. They noted that the trend may be accelerating slightly due to periodic fluctuations in the Gulf Stream, which runs along Florida’s Southeasat coast. The current, 2015 projection delineates intermediate and high forecasts for sea level rise (SLR), measured at Key West, which will range from six to ten inches of rise (above the 1992 mean sea level) from 2015 to 2030, and fourteen to twenty-six inches from 2030 to 2060. The long-term sea level rise prediction is 31 to 61 inches by 2100. This regional sea level rise projection is consistent with, though may outpace, global forecasts for sea level rise due to ongoing variations in the Florida currents and Gulf Stream.

The Sea Level Rise Work Group recommends interpreting the projection as follows for infrastructure or other investment planning purposes:

The lower boundary, the blue dashed line, can be applied in designing low risk projects that are easily replaceable, and have limited interdependencies with other infrastructure or services. (For example, docks.)

The shaded zone between the IPCC AR5 Median curve and the USACE High is applied to most projects within a short-term planning horizon. It reflects the likely range of sea level rise for the remainder of the 21st Century. (For example, buildings.)

The upper curve should be utilized for planning of high risk projects to be constructed after 2060 or projects that are not easily replaceable, have a life span of more than 50 years, or are critically interdependent with other infrastructure or services. (For example, water treatment plants.)